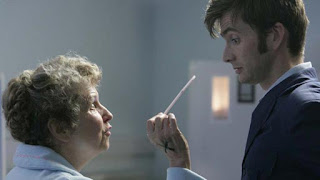 The evil Racnoss have been defeated. Donna Noble has stopped the Doctor from 'going to far' and offered him a place at her family's Christmas Dinner table. He declines. And some weeks pass... Until one day, picking up on some strange energy readings around a london hospital, he begins investigating. At this hospital a medical student named Martha Jones is following consultant Mr. B. Stoker around on his rounds. One of the patients is a nice old lady with a seemingly routine problem. Another is a Mr. Smith, admitted with stomach pains. Of course, this Mr. Smith had two hearts. And is the Doctor.

When the whole hospital is kidnapped and taken to the moon by intergalactic ruffians the Judoon, Martha teams up with the Doctor in an attempt to get everyone home to Earth safely. The Judoon are after the poor old ill lady, who is actually a vicious criminal, a Plamsavore, escaping from her planet after assasinating a Princess. Through teamwork and inventive thinking - and a snazzy little "genetic transfer" between our hero and his would be companion - the Earth is finally saved and Martha is promised one trip ("Just the one, mind...") in the TARDIS by way of thanks. 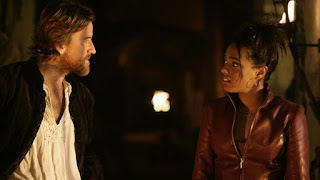 Choosing a trip into the past, the Doctor and Martha come face to face with William Shakespeare himself, with witches and magic, aliens and angry queens (no, not Julian Clary beaten to the Dame role in Panto). Series Three saw our heroes fight the remnants of the Cult of Skaro, Weeping Angels (who will return in Series 5 against Matt Smith's 11th Doctor), genetic mutants and - as the Face of Boe predicted - the Doctor's arch nemesis, The Master (played firstly as a doddery old man by Derek Jacobi and then with oozing menace by John Simm). And what was, some thought, a slow series - lacking in action and tension - was redeemed with a huge two (almost three) part finale. The Master, posing as Prime Minister of Great Britain, used a band of future-human refugees, stripped back and made into nefarious "Toclafane" to enslave the planet for one whole year. But, thanks to the efforts of Martha and a small band of resistance fighters, along with the conciousness of the entire population of Earth, the Doctor is empowered once more. The Master, however, doesn't like to lose, even if it means giving up his life. Shot by his wife, Lucy, and refusing to regenerate he dies in the Doctor's arms leaving him, once more, The Last Of The Time Lords... 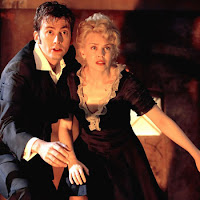 Martha was always going to be a one-series companion. That was the plan. And she wouldn't have worked as well if she'd stayed longer. So, when she said goodbye to the Doctor and the TARDIS it meant that our hero needed a new friend... And goodness, did he get one! Kylie Minogue in the bloody TARDIS?! No. Not in the TARDIS really... But a companion nontheless. Against the bodyless, moneyless Max Capricorn and his Hosts the Doctor averted the crash of the Titanic (the starship, that is) and saved the world AGAIN!

Christ, this bloke is good at what he does.