Pinstripes In Time And Space - The Tenth Doctor, Part One 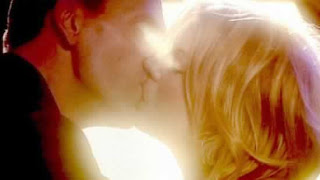 The Daleks are defeated, the threat averted and yet the Bad Wolf is dying. In order to save his companion, Rose, from certain death the Ninth Doctor absorbs the power of the Time Vortex, returning Rose to her human state and giving up his own life in the process. "I absorbed all the energy of the time vortex and no-one's meant to do that... every cell in my body's dying." And for the first time since the '96 TV movie, an audience sat in awe waiting for the Doctor to change his face. "Time Lords have this little trick, it's sort of a way of cheating death, except, it means I'm gonna change. And I'm not gonna see you again, not like this, not with this daft old face." Out was the exceptionally brave and fantastic Ninth Doctor, played to perfection by Christopher Eccleston. Coming soon was the Tenth Doctor... But just who would he be? "I might never make sense again!" 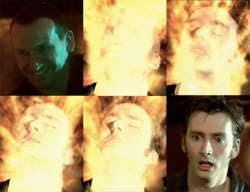 And, ending his tenure as The Doctor with the word that Whostorians will use forever to describe his time behind the console, the Ninth Doctor signed off with; "Rose, before I go I just wanna tell you - you were fantastic... absolutely fantastic... and d'you know what? So was I." And FANTASTIC would forever be synonymous with what younger audiences were to witness. A regeneration. Of the very best kind. The kind that welcomed a thin, Scottish gentleman into the TARDIS. Before you could say 'Barcelona!' David Tennant was The Tenth Doctor. But audiences had to wait until Christmas 2005 to see what he was like, save for a 4 minute minisode for Children In Need which only told audiences that something was very wrong with our new Doctor's regeneration. 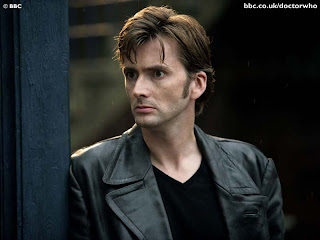 Christmas Day, 2005/6* on the Powell Estate. The TARDIS's engines screech and hum... They sound strained and overworked. And before the eyes of Jackie and Mickey, it spins through the sky and crash lands in an alley. Out pops the NEW Doctor, breathless and manic. He clambers towards Rose's family - who stand aghast - and offers his explanation: "I know! Merry Christmas!" And then he passes out. Regeneration is a strange old bird. Outside the show audiences have to get their head around the fact that their hero, the man they have followed for the last year, is now COMPLETELY different in EVERY way. INSIDE the show, something was terribly wrong. The regeneration was failing. To have the main character of a show to spend 70% of his first episode in bed, unconscious is a brave move on its own. To do this on Christmas Day, with an average of 12 million people watching to see the NEW Doctor, surely that is madness? But, in true British fashion, a cup of tea and a satsuma was all it took for the Doctor to bounce into our hearts with charm, hair and quotes from The Lion King; defeating the invading Sycorax in a sword fight and bringing down the British government with six words, the Tenth Doctor had well and truly arrived. And he was here for the long haul. 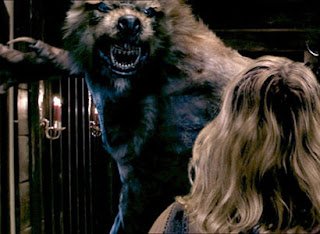 Through adventures with Rose, fighting werewolves (in 'Tooth and Claw'), Cybermen (in 'Rise of the Cybermen' and 'Age of Steel'), Clockwork Droids (in the magnificent 'The Girl in the Fireplace') and Peter Kay (in 'Love and Monsters') the somewhat creepy relationship shared with the Ninth Doctor blossomed into a beautiful and subtle will-they-or-won't-they love story throughout the second Series. But, as in all good drama, a love story should never have a happy ending. In the closing moments of the epic 'Army of Ghosts', "the story of how [Rose] died", we learn that not only have the Cybermen found a way out of their Alternate Universe, but have cleared a path for the Cult of Scaro (a vicious Dalek Think-Tank) to follow them. The battle of Canary Wharf - a metal against metal war, the wet dreams of Robot Wars - culminated in Rose being sucked into the Alternate Universe, trapped there, leaving the Tenth Doctor alone and hurting. The closing scenes of "Doomsday" are, without question, some of the most moving ever broadcast to family audiences. I defy you to tell me that you didn't fight back a tear when, as Rose told him she loved him, the Doctor uttered his last words to her; "and I suppose, if it's my last chance to say it, Rose Tyler..." before the connection allowing them to talk across Universes was lost. That solitary tear on the Doctor's cheek... Owch! 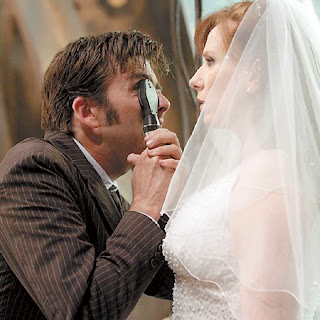 But this is adventure science fantasy! Not namby pamby, wishy washy, poncey, prancey, lovey dovey, girly, kissy wissy romace! And the Doctor lives on! Without a second to grieve his loss, the Doctor finds a human, Donna, in her wedding dress, in his TARDIS. With no explanation. And this wasn't just any old bride. This was Catherine bloody Tate! The guest star in the 2006 Christmas Special "The Runaway Bride" was the best kept secret in New Who history! I don't think ANYONE knew she would be appearing. And in the closing moments of "Doomsday" we got the signifier of Christmases to come. Like eggnog, Noel's Christmas Presents and Doctor Who itself, Tennant's "What? What?! WHAT?!" has become expected. A lead into the Christmas Special. THE Doctor Who cliffhanger phrase. Joining the ever-growing bank of 'catchphrases', already containing "Alon's Y", the 'Whats' were a stayer... And at Christmas, Catherine Tate and David Tennant thrilled audiences with TARDIS/Taxi motorway chases, giant spiders, evil Empresses and double agents. But, as this is Christmas after all, the day was saved... Another Christmas would go ahead because of the Doctor. Ten was making a habit of this! An irony not lost on the fans who know that this Christmas, as much as we hate to admit it, he will have to save the world one more time, just before he dies again. But enough of that miserable talk. The Doctor's story as told here is incomplete.

*The WHONIVERSE is missing the year that happened while Rose was travelling with the Ninth Doctor, when he returned her home after 12 months, not 12 hours. Therefore it runs one year ahead of real time.

In Part Two, The Tenth Doctor meets Martha Jones; Medical Student, shares a kiss with that woman off Spaced, meets Shakespeare and gets an ominous warning from "old friend" the Face of Boe; "You Are Not Alone!" And boy, doesn't he know it! He also meets Kylie Minogue and Catherine Tate (again).

Part Two of The Tenth Doctor will be posted on Christmas Eve, and will cover his life as far as
the opening scenes of The End Of Time, Part One.
Posted by Gareth Bundy