Wilfred Mott - The Most Faithful Companion? 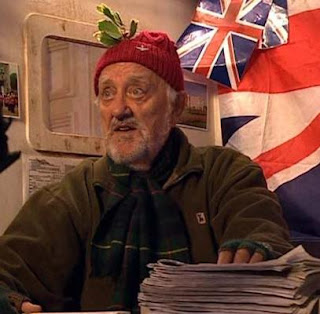 Once upon a Christmas, the Doctor was teleported to Earth on Christmas Eve and something was wrong. Everyone was gone... Well, almost everyone. The Queen had stayed behind, not allowing herself to be cared by the threat of alien happenings on Christmas - AGAIN! And someone else was hanging around London too, holding vigil with Her Majesty.

Wilfred Mott (Bernard Cribbins) was out too, in his booth, selling papers. With an unnaturally inquisitive mind when it came to all things extra terrestrial, Wilfred Mott was left speechless and wondering "how" when he witnessed the Doctor (David Tennant) and Astrid Peth (Kylie Minogue) teleported away to the SS Titanic in front of his very eyes. And that, in most people's lives, would be all an encounter with the Doctor would be. But Wilf isn't just any nice old man... The Doctor would forever be linked to Wilf by family. Donna Noble (Catherine Tate), the Doctor's feisty companion (who he met not only once, but TWICE) was Wilf's granddaughter. Of course, neither Wilf nor the Doctor knew this until much later into Donna's adventures! And, through the intervention of Dalek Caan, the fate of all three would be cemented together. Unfortunately, their time together would not have a happy ending! 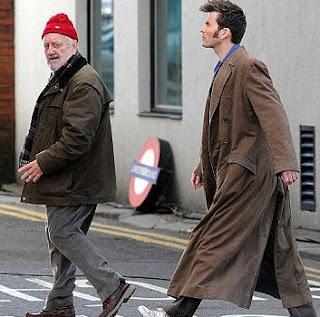 When Donna absorbed the Doctor's mind during the metacrisis in Journey's End the Doctor had no option but to wipe her mind of all traces of him and her adventures with him. The speed and care that the Doctor took in taking Donna home, to the Chiswick home she shares with her Mother, Sylvia, and her Gramps, connected Wilf and the Doctor forever. Two wise, knowledgeable old men taking on the world together. There is mutual respect there. The Doctor trusts Wilf. He charges him with the task of making sure Donna never remembers her time in the TARDIS. And Wilf promises not forget the Doctor and to think of him whenever he sees the stars.

Sadly, the Doctor and Wilf's paths are to cross sooner - and in much worse circumstances - than either of them thought. This year, on Christmas Day, the Doctor will call on Wilf, reluctantly, to help him defeat the threat posed by the return of his most feared adversary, the Master. And if rumours circulating at the moment (about a gift given to Cribbins on his last day of filming) are to be believed, it may be the last great adventure Wilf gets to have. The Doctor must die, we know this, but as Caan prophesised in Journey's End "Death will come to the most faithful companion" and, unfortunately, "one must still die!"...