Doctor Who Scheduling Confirmed By BBC 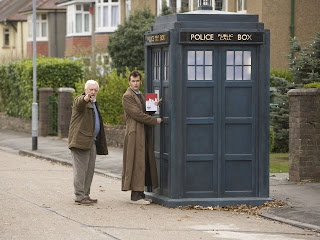 So, after months and months of waiting and wondering just how the BBC will decide to show the two parts of David Tennant's epic finale The End Of Time, we finally have an answer! Some of you will be happy, most of you will go "Oh, I thought we knew this" and a few of you will complain that you have to wait too long between parts one and two...

But, confirmed it has been!

NOW, on hearing this confirmed officially, the excitement can start. As you may have noticed I have already added a countdown to the first part above. And one more great thing to come out of this; David Tennant will officially be the Doctor from Christmas Day 2005 - New Year's Day 2010. That's great! Five years (don't be picky) of Tennant has been great. Now, when he goes, I'll be looking forward to at least five years of Matt Smith. Oh, and he's gonna be good!
Posted by Gareth Bundy