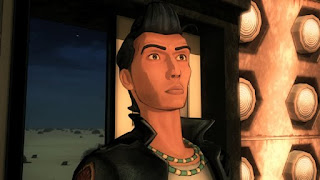 Well folks, this is it. The last episode of Dreamland has arrived. Mrs Grey and the Doctor are rushing to get the genetic weapon back to Mr Grey. Cassie and 'Steppenwolf' are speeding toward a sticky encounter with a Viperox army and Lord Azlok ain't giving up until he's wiped the Greys out of the Universe. I loved this last installment. Full to bursting of lovely little Whoisms and a couple of beautifully animated 'Flying Saucers', the Doctor (obviously) saves the day and finally gets the chance to eat! He's gone off the chili though, not surprisingly. A real war rages in the skies, helicopters vs. Viperox, but Rivesh Mantilax (Mr Grey) is saved just in time. Oh, go and watch it... I'm not doing it justice. My only complaint is that this wasn't the same length as Episode One. At 7 minutes this does suffer a little from dues ex machina syndrome a bit. But never let it be said, with a sound system like that, that the TARDIS is a bad place for a party. 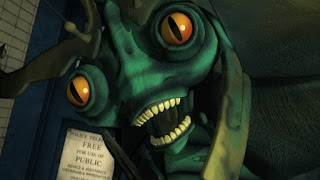 One thing we now have to accept though people. As greatly enjoyable as this series was, it is the LAST time we will see Ten in his blue suit and the last Doctor Who until The End Of Time on Christmas Day. Scary, huh? And THAT will be the beginning of the end for Tennant. As Azlok mentions to him, before being sent packing by the wonders of sonic technology, "Your day will come, Doctor!"... "Yeah, so they say" replied the Doctor, carelessly. All I hope, with all my heart, is that this "cartoon Doctor Who" thing is done again, with Matt Smith as the Doctor. And you know what? I'm even going to say this; use the same animation style. It certainly wasn't as bad as we all thought it would be and, to be honest with you, I kinda fell in love with it by the end.

Don't miss Dreamland, broadcast as a 45 minute animated stand-alone on December 5th (10am) on BBC2 and the CBBC Channel. I'll be there, watching along again. And I think it'll benefit from being screened all together. BBC2. Dec 5th. 10:00am.

Now, what the hell am I going to write about for the next few weeks?
Posted by Gareth Bundy