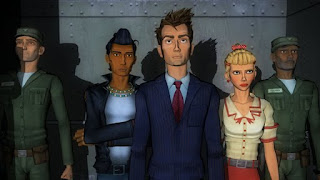 Oh wow! So, episode two of Dreamland was released on the BBC Doctor Who site today, the next installment of the Doctor's new animated adventure. And fair play to the writers! What a fun, action packed little series this is turning out to be! STILL the animation is "unfamiliar" but I think that's all it is, it's not really as bad as we first thought. Once you get into the story (which is pretty good, actually) you find yourself overlooking the computer game graphics. As @ahremsee mentioned on Twitter today, Dreamland is like "an audio play with pictures". It's lovely. It's funny. It has one hell of a nasty alien! Menacing, intelligent and genuinely scary, the Doctor has rarely encountered such a beast. 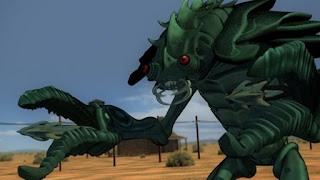 The Viperox, a battle-savvy race of green insectoid monsters, are awesome! Given the right design they could work very well in Doctor Who Proper. They've arrived on our planet with a purpose, but that seems not to be invasion. "We seek an enemy of our kind" hisses the Uber-super-duper-Viperox Prince or whatever... but we don't yet know who or what! and this episode, like the last one, has a snappy little cliffhanger ending too... I promised myself not to post spoilers of any of this series, so all I'll say is this; NEST. Who'd have thought that such a quaint little red-button experiment like this would turn out to be so enjoyable! Especially after all the bad comments it's received from us lot.

I can't recommend this enough, click the BBC link above, watch it in order, and hurry back here after school tomorrow (snarf snarf) for Part Three.
Posted by Gareth Bundy