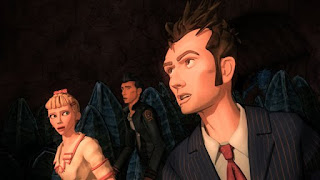 So, despite all the apprehension I was feeling about this mini-series, based on bad animation and an idea that has been done to death, I have to admit that Dreamland could possibly be the one thing we should have had in the so-called Gap Year. Not only does it have a killer alien race, a pair of fun companions and a nice little conspiracy feel, it also has some really touching, funny little moments that out-do (in my humble opinion) some of the emotion in Doctor Who Proper. Today, part three offered up a thrilling chase through abandoned mine shafts, an encounter with robot-alien-cleaner-uppers/Men In Black and another lovely little cliffhanger. 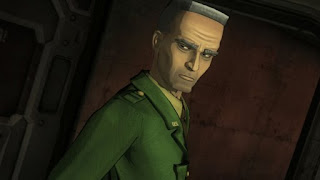 Granted, the cliffhangers are on a par with "Sarah Jane falling down the hill" in The Five Doctors (episodically broadcast version) when it comes to the threat level how they are solved, but knowing we only have to wait one day for the resolution means we don't mind so much, right? So... little time is given to us to debate and speculate about what Colonel Stark meant by "You've just helped me save the world!" prompting the Doctor to worry that, for the first time in 900 years, this is 'bad news'. Also, without spoiling too much for you (remember, I'm trying to do this spoiler free. And failing, evidently) if you like traditional looking "Grey" aliens, then this episode is for you.

I love this series. I'm having a hard time not squeeing like a fan girl over it too because Area 51 has always been of interest to me. I have to give this episode top marks once again, and I didn't even notice the animation flaws today which means the story is doing it's job.