Doctor Who: Dreamland, Episode One 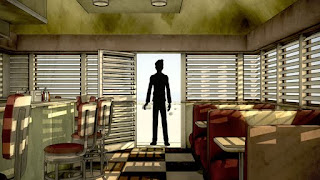 It seems that David Tennant's final story will be dark, brooding and serious. And sad! So a nice, jolly dash through the sands of Nevada will be welcomed by many! 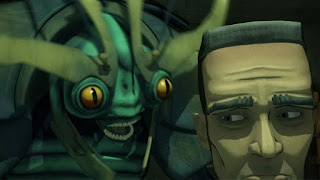 The story seems straight-forward enough so far. The Doctor visits a Nevada diner 11 years after the Roswell crash and notices that an alien artifact is being displayed as a piece of the damaged ship. Some Men In Black turn up, then a big green alien, then the army. General Stark decides to wipe the minds of the Doctor and his new "companions" but the Doctor is too good for them and decides instead to escape and explore... There is a twist, so click here to watch for yourself. Then again, the photo to the right kind of spoils it. But hey, it's still fun. Georgia Moffett's (previously the Doctor's daughter, Jenny - now Cassie Rice) accent is terrible but that's okay too. All in all, this is a very welcome little treat to help shorten the wait between now and Christmas.

Don't expect a masterpiece of dramatic story telling and you won't be disappointed, because Dreamland is lovely. Even if the music overpowers the action on occasions, but we're used to that now!