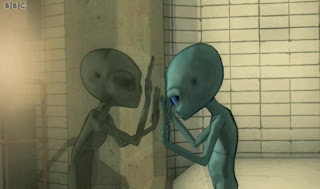 When we last left the Doctor and his faithful yankpanions, he was trying to uncover the secrets of the alliance between Colonel Stark and the vicious Viperox. It seemed that maybe the lovable Grey aliens weren't as harmless as they appeared. Could it be that the Viperox hoards are the good guys here? Well, episode four held the answers! I've given up on trying to avoid spoilers here, you know the score. Go watch the bloody episode first. Bloody brilliant episode it is, too. The answer, then, to that question about the Viperox, is no. They are not nice aliens. They are chasing a weapon which could be used against them in the war with the Greys, remember the space-junk in the diner? Yeah, that. And Colonel Stark and the US Army are looking to use it for themselves, to rid the world of "The Reds", yep. RUSSIA! Fear of nuclear war is inspiring Stark to get rid of the enemy using an alien bio-weapon created by the Greys. NOT A GOOD IDEA because, as the Doctor knows, the cold war is... well, cold. Nobody shoots, nobody wipes anyone out. 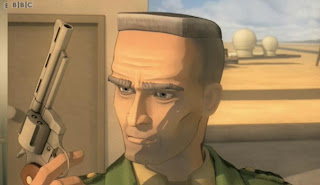 So the Doctor steals the weapon, heads to the roof and is chased by Stark, who explains a bit about the plan, about what the deal is... But when the ever knowing Doctor explains that the Viperox are cunts (I'm paraphrasing here), Colonel Stark decides to act with him. But is it too late?! I can't give this series enough praise. It's going to be brilliant seeing it as a 45 minute stand-alone. I can't wait for it to be shown on December 5th, 5pm on CBBC Channel and BBC Two. It has everything! Suspense, fear, humour, bad-ass aliens, good-ass aliens, a companion apparently dressed in the get-up of The Fifth Doctor (see the link there, fact fans?)

Roll on tomorrow, for I think the game just got hot! Can the Doctor save the world? Yep, but it's gonna be worth watching anyway! :)
Posted by Gareth Bundy