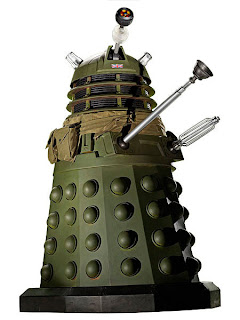 The Daleks return to our screens this weekend after what seems like no time at all but is in fact quite a while. And as you can see from the image on the left, they've been kitted out for WAR!
Yes, Saturday night's Victory Of The Daleks sees the metal bastards pretending to assist Winston Churchill during WWII. The BBC One TV spot shows a lone Daleks blasting numerous planes from the sky and also offering tea to the humans. All very Power Of The Daleks.
But it's not just the new paint job that sets the Daleks apart from their previous appearances this week, as these new Radio Times covers (available on the Radio Times website, linked below) show! The Daleks design has been given a pretty neat overhaul to pull them into the new era of the show. The exciting new look has seen the vertical slats around their neck removed, the horizontal vents altered, the trademark "bumps" jazzed up and a brand new BLASTER/EYE-STALK/"WHISK" combo added. Oh, and a serious paint job! Now available in all your favourite colours* the Daleks have gone "all political" for the new series! Yellow, Red and Blue Daleks - bright and reminiscent of the 60s Dalek movies (starring Peter Cushing as, in my personal opinion, a mental patient/inventor pretending he's the Doctor - calling himself "Dr Who" - schoolboy error mate!). 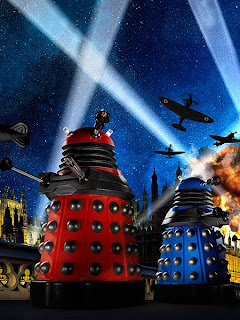 I personally love the new look! I think they've been given a brave, exciting and "retro-future" look which somehow sits brilliantly in the lap of the new series. It's a design that simply won't do for some, though.
Already there is a pinned thread on Gallifrey Base discussing the pros and cons of this new and hefty tweak. Some love then (mainly those who've seen them in action - the lucky buggers who have already seen Victory) and some hate them. I have to say, again, I love them. I think they are beautiful. They have the menace of the Daleks of old, the clunkiness of the 2005 era and an added "comic book future" look to them.
I would love to hear your thoughts, love them or hate them (or just simply feel indifferent to the new design). You can comment below, leaving as much love or hate as you like! And you can see the actual covers themselves, one for each of the three coloured variants (red, yellow and blue, topped with the strap line "VOTE DALEK" - never let it be said that Doctor Who doesn't "do" politics!) by clicking on to the official Radio Times website and browsing through the thumbnails to the left.
I suppose only time will tell how these new-look nasty swine match up to the Daleks we know and love, but I'm confident. They are, after all, just Daleks. Right? Well, Saturday. BBC One. 6.30pm. Not long now...
Posted by Gareth Bundy