"The Only Psychopaths In The Universe To Kill You Nicely" 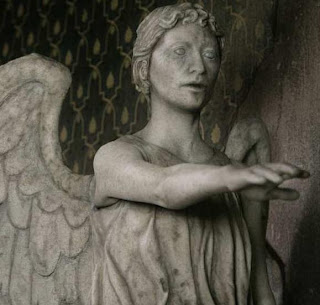 Once upon a Tuesday, new Doctor Who executive producer and head writer, Steven Moffat, gave his first broadcast interview since taking the reins from outgoing exec producer, Russel T Davies, to a lovely, dithery-sounding old fella on BBC Radio 3.

Steven talked about his idea of what Doctor Who is - a dark fairy tale. He talked about the role of the Doctor and the actors who play him - Matt Smith, apparently, plays the Doctor as someone who's been alive for hundreds of years!

And a bunch of other stuff. He's not a very forthcoming interviewee, not very much is talked about that hasn't been heard before (mainly in the Moffat opinions posted on the old Doctor Who Forum by the man himself) and what new stuff they do discuss is skimmed over with such spoiler-avoiding expertise that it's a surprise we know ANYTHING at all about Moffat's first series...

Although, when he was asked to give just one exclusive piece of information, a little teaser, something that ONLY the production team know for sure, he thought for a while and then offered this. What is really the first piece of solidly confirmed information about the 2010 series, DESPITE it being something we have speculated about on forums for weeks and weeks! Six words, "just six..."

"The Weeping Angels are coming back!"
Squeeeeeee!
Posted by Gareth Bundy