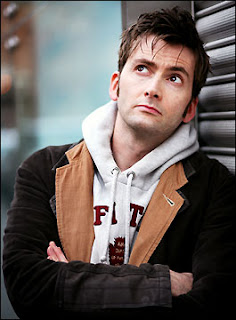 Before Christmas, on top of repeats of every Doctor Who special to be shown this year, Who fans everywhere rejoiced as David Tennant took over the BBC channels in a shameless tirade of, well... Tennant.

He was a panelist on the QI Christmas Special, guest host of the Never Mind The Buzzcocks Doctor Who Special and even read stories to your children so you could nip upstairs and wrap their presents. Then Christmas Day arrived and we got the Doctor Who Christmas Special, the first part of David Tennant's poignant departure (reviewed yesterday).

And as if the beauty that was The End Of Time, Part One was not enough, Tennant-Fanciers everywhere had much to gawp at. This Christmas week has offered more Tennant Specials than a homeless Scotsman on a Glasgow park bench*. True, Doctor Who divided viewers into two camps. Those who enjoyed the story for what it was and those who expected it to match the hype. I loved it. BUT! I wanted more straight away! Ordinarily I would hop straight onto iPlayer and watch it again, but this Christmas I have company. And even though my girlfriend, Natalie, is also a huge Who fan she wouldn't let me watch it again so soon. And she's the Boss. So instead - and luckily for all the Tenninch Fangirls out there, you know who you are - I waited an hour or so and watched Tennant in Catherine Tate's "Nan's Christmas Carol". Drawing wholly on the original Dickensian tale, Nan is shown the error of her ways by three Ghosts, the Ghost of Christmas Past (Ben Miller), the Ghost of Christmas Present (TENNANT) and the Ghost of Christmas Yet To Come (Roger Lloyd Pack). 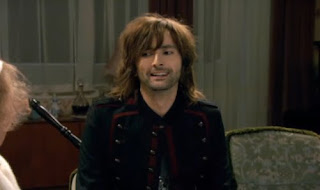 Imagine a gay, Scottish Russel Brand. There he is. David Tennant's Ghost of Christmas Present is just that. Mumbling about facebook, i-tunes and the like, he minced his way through the Present section of the story in true Tennant fashion; with ease, humour and an ultimate command of the screen and all on it. It was a wonderful performance. So good, in fact, that if you didn't KNOW it was Tennant you wouldn't know it was Tennant. The show on a whole was funny, a nice little post-excitement treat for all us Who fans. Seeing him and Tate onscreen together, with the language as blue as Tate's painted on varicose veins, was slightly odd. Just hours earlier I'd watched them not meeting while saving the world. Or not saving it as the case may be. If ever there was an antidote to the intensity of the Who special this was it. And I loved this too... But our days this Yule with Tennant are far from over! For tonight, dear friend, Mr Tennant gave us his Hamlet. 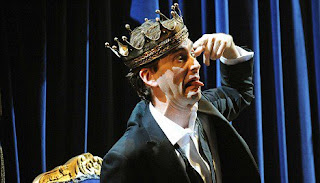 For those lucky enough to have seen this on the stage, FUCK OFF (not really, I'm just jealous). I'll make do with the TV adaptation, thanks. And wow, what an adaptation! I'm not going to recount the story here, it's Hamlet for crying out loud. If you don't already know what it's about you won't be interested. I know some, for instance, who gave up on this before the 15 minute mark. Those people watched for Tennant and Tennant alone. That's fine, but a Shakespeare fan would bathe in this and come out feeling cleaner than they have ever felt before. Tennant (and the rest of a truly stellar cast) blow our minds in this, the latest RSC offering for the BBC. It's amazing. And guess what? You can buy the DVD on January 4th! I will be.

And then, with a week-to-come that will inevitably be filled with iPlayer repeats of TEOT Part One and all to do with it, we reach The End Of Time, Part Two on New Year's Day. We know next to nothing about what's to come, except that the Time Lords are back, the human race has been transformed into the Master race and, probably worst of all, the Tenth Doctor will regenerate. It's so sad even typing that...

And with that, our Tennant Overload ends. Never again will we see him roaring through time and space, saving planets and peoples in thrilling acts of selfless bravery. Never again, I sort of hope, will we see him garb'd up as Brand, Ooh-ing and Woo-hoo-ing all over the shop. Tennant's TV Takeover is over. And the real telly starts once more...

But hey, we have a few days until then. And there's always the iPlayer... But, just to whet your whistle, go here to see some exclusive TEOT Part Two clips and info. And here's the tv spot. Enjoy!

* That was a bit racist. If you're Scottish or offended, or both, I'm sorry.
Posted by Gareth Bundy