Well, well, well! After what seems like years (it's not - it's barely weeks) without any filming news at all, this week saw the return of everyone's favourite Time Lord To Be to the streets of Cardiff. Almost.

Scenes shot at night in a Cardiff graveyard have got people talking about the possible return of an old enemy and news from the most recent location, the much-used Temple Of Peace in the city centre, has strengthened these rumours. Maybe even confirmed them to be true?

The following post contains spoilers.
If you don't want to know "the score", look away now!
*** SPOILERS AHEAD *** 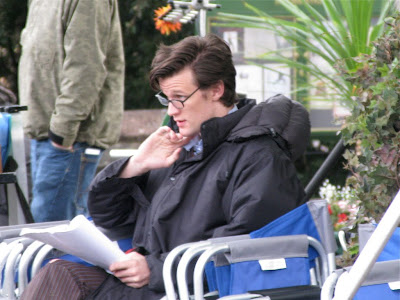 We've heard all about the Doctor's supposed post-regenerative food cravings. We've poured over pictures of the delectable Amy Pond dressed as a - ahem! sexy - police officer. We've scratched our heads in the hope of understanding why Matt seems to be talking to CGI dogs! We've heard polite Daleks offering WWII scientists tea. So far 2010's set reports seems to be a big jumbled bag of confusing, yet exciting, snippets of what's to come... And here, my friends, is another!

This is Samantha. Samantha, so we hear from several reliable sources, is playing a "female Silurian. Part of a colony of Silurians who have survived underground by feasting on human corpses". Others like her have been spotted filming at the Temple Of Peace this week too, although with nothing close to this much visibility. Make of her what you will. Some are saying "this doesn't look like a Silurian at all!" but those in the know suggest that the story is deals heavily with global warming and Darwinism, so there is always a possibility of evolution in the alien ranks.

Little more is known about the story. We do know that a possible second companion, "Rory" (played by Arthur Darvill) is accompanying Amy and the Doctor into the near future this time. FYI "Rory" was previously seen on location filming for episode one.

Sci fi legend Ian Levine claims (on the Gallifrey Base forum) that this is Chris Chibnall's 2 part Silurian story, episodes 8 and 9. He has yet to be wrong in his predictions. So take it as read, I think. And a scary little tale it looks too (although another rumour suggests this female Silurian falls in love with the Doctor...)

As always, our intrepid roaming set-reporters have been out in force gathering up all the information they possibly can from hours and hours of hanging around in Cardiff's (torrential) rain to bring us the best spoilers and spotting around. Oh, the joys of living in Cardiff City! This is my favourite Matt/Karen video yet!

If you use Twitter, you should search the #dwsr set report tag for updates, or follow @DrWhoSetReports, @drwhofilming and @drwholocations for the latest news.

Thanks to @alun_vega, @ahremsee and all the other set reporters for their efforts (you know who you are) along with coldkittenanxiety and catalistt for their videos!

And stay tuned, there will be more of this COMING SOON!
Posted by Gareth Bundy