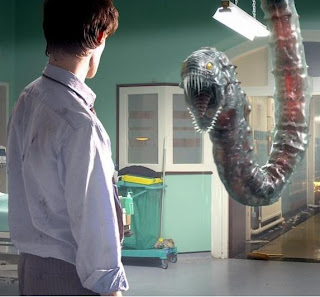 OH! MY! GOD! The Eleventh Hour has arrived. Episode one has Been Shown! And I think it's fair to say that it was nigh on the most exciting series opener since the show's return in 2005. SO much to say about this masterpiece of an episode so I guess the best place to start is the beginning... I'm not as good at timey wimey as the Doctor.
So, first of all, that pre-title sequence we'd already seen! It's basically a big HELLO from the new team. Flying through the skies of London, in a burning TARDIS, Matt Smith introduces us to his Doctor by dangling from the doorway with a Sonic Screwdriver in his mouth! Unbelievably, the excitement levels are sky high before the opening titles roll! And those titles!!! WOW! We get a smoky, stormy, cloudy new "vortex" (is it the vortex? Or is that blue swirl from the trailer the vortex? We don't know yet do we? THAT'S exciting too!) and a new theme arrangement that has been - quite rightly - described as "FUNKY". Out are the "duba-da-dums" and in is a frankly killer intro to a positively 80s theme - retro and new all at once. I loved it instantly! Others weren't quite so sure, but as with all new things it may just need time to grow on them.
And now to the episode itself! It's a strange old beast, The Eleventh Hour. The alien threat is almost by-the-by (or is it?) with the main purpose of the whole thing being to introduce the Doctor, as played by Matt Smith and Amy Pond, played with sizzling relish by Karen Gillan. That's not to say the plot is not fantastic too! In my opinion the Atraxi were underused but that is literally the only negative I have to offer. And it's not really even a negative! Prisoner Zero (presumably really the Face Tendril we were told about) is an eel-like shape-shifting alien on the run from a space prison! And it's a monster that fits in perfectly with the new look of the show. A look, incidentally, that is brought about with incredible patience and subtle change. This really is the same old show we've been watching for the last five years! Only bigger, better, cheekier, sexier and yet more grounded and grown up. Even my Mum (a woman who has never watched Doctor Who because - and I quote - "it's fucking shit!") called me after the episode had finished to tell me just how much she enjoyed it! I'm not going to recount the entire episode, you should have watched it already! But Wow! WOW! I just cannot find the words to describe how brilliantly written, acted, designed, lit and shot this amazing piece of television was! 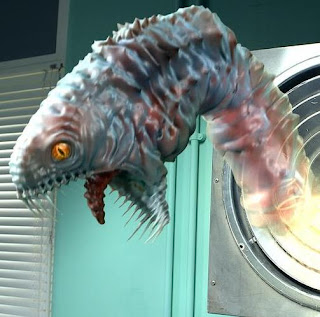 I want to talk a little about the new team we have. Matt Smith, first of all, IS the Doctor. The man has just shoved David Tennant from my "Top Five Doctors" list. He's in my Top Three. He's number two. He could become number one... He's that good. A mix of childlike enthusiasm and ancient experience topped off with what can only be the most alien of all post-regeneration states. Smith takes the role of the Doctor to unbound new heights.
Never has the role had so much energy and thought and wonder - and after almost five years of Tennant, that's saying something! Then there's Karen Gillan as Amy Pond. Again, there's something here that the previous companions seemed to fail to "get" - but we didn't miss it because this is new! This is a distrustful, resentful, hurt companion who isn't a wonderful role model or a likable everyday girl who is the heart of the show. Amy is mouthy, sexy, outrageously flirty, a little bit nasty and incredibly delicate. I have theories about her which I'll be blogging about later in the week maybe, if I don't wake up tomorrow thinking I'm completely wrong. Amy IS the best new companion. Of that there is no doubt. She takes everything that was RIGHT about the previous three - Rose's heart, Martha's wonder, Donna's humour - and distills it into the perfect character. Impeccably well written and expertly played. She has more layers than an onion! And Gillan makes her seem so real!
But, for me, the stand-out performances in this episode were from two of the supporting actors. Firstly, young Amelia Pond played beautifully by Caitlin Blackwood (she's going to be a huge star, you mark my words) who is cheeky and trusting yet devastatingly cynical of life and people. A nice change from perfect life portrayals of kids that we're more than used to on television these days. And secondly, Rory Williams. Arthur Darvill is NOT the Doctor. That's who his character is. Long suffering boyfriend of Amy, completely in love with her. Downtrodden and looked over by everyone. I have a feeling he's going to bring something very special to this show, you know. 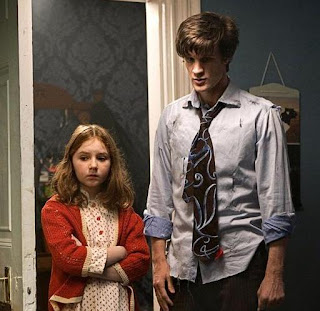 Yes, for me the characters in this episode made it so special. The story was great, the action exciting and wonderful. The aliens were creepy (Prisoner Zero) and unusual (the Atraxi) and the Doctor is well and truly back. I defy anyone to watch this episode and not like it. You don't have to LOVE it (although I did, completely) but like it. It's charming television.
There are also several laugh-out-loud moments in it! My personal favourites were the Doctor proclaiming "Get a girlfriend, Jeff!" after borrowing a supporting character's laptop and seemingly discovering his porn stash, and Rory's EXCELLENT line - my favourite in the whole episode - "You just summoned aliens back to Earth. Actual aliens. Deadly aliens... ALIENS... OF... DEATH!" The poor guy! What a plonker, eh? Genius. If this is the quality of writing we are to expect in the Moffat era then I will be the happiest man alive. The future is well and truly in safe hands. Smith, Gillan, Moffat! The new dream team. And we've had our first taste of what they can do. Magic. Or Fairytale. Wonderful - I've watched it three times and I'm re-watching it again RIGHT NOW! It really was that good.
If you haven't seen it, or want to see it again then check out the BBC Doctor Who site or head over to BBC iPlayer and watch it again now!
I give this episode a strong 9/10.
Posted by Gareth Bundy