New Doctor Who slammed for ginger comment
New Doctor Who star Matt Smith hasn't even appeared in a full episode of the hit show yet, but he's already managed to enrage a number of fans. When Matt made his debut as the Doctor on New Year's Day, one of his first lines as he checked out his new appearance was, "Still not ginger." The comment, which is clearly a harmless joke, upset a number of mums who fear their kids will be bullied at school as a result. One angry viewer said, "I think it's totally inappropriate for the Doctor to make fun of people with ginger hair - I think it will encourage bullying." Erm, really? Show insiders and fans in the know are adamant the comment is an in-joke that is actually meant as a compliment. Sounds like a lot of fuss about absolutely nothing to us. 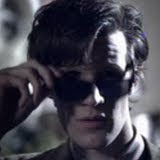 Am I the only one who wishes that those who complained about the "Tesco Ginger Christmas Card", that are back out in force, would do their homework before jumping? I just wish they would stop being so bloody tetchy about the ginger thing!

I have ginger hair, I was NOT offended by the Christmas Card thing and I'm certainly not offended by this! My nephew used the Tenth Doctor wanting to be ginger against his school bullies (he's 10 and also ginger). They were calling him ginger-related names and he said (because he knows the bullies loved Dr Who too) "the Doctor wanted to be ginger, you gonna pick on him?!" and they thought about it and left.

I'm just glad that Heatworld.com put the record straight and mentioned it was meant as a compliment.
Posted by Gareth Bundy