The Waters Of Mars - My Thoughts

I promised you a review, here it is. Of sorts.

There are, in my opinion, three types of Doctor Who episodes. There are the fun, camp romps (like Planet Of The Dead or Love And Monsters), there are the standard story arc builders (that push the series to its finale) and then there are those rare occasions where we get something VERY special.

The Waters Of Mars fits squarely, and maybe even perfectly, into this category.

It was epic. It provided everything Doctor Who should be. Well, that's not quite true. It was a little too grown up. Let's not forget that the show has always been aimed at an audience of 5 - 12 year olds. They want farting aliens, spikey midgets and Peter Kay in a naked fat suit. Even if we (the grown up nerd patrol, sorry... Old Series Fans) don't. What we got in The Waters Of Mars was death, destruction, hopelessness, rule breaking, the turning of our hero to villain, arrogance, irresponsibility and a suicide. It sounds like a depressing Richard Curtis title.

But it worked! It was amazing! A few things in this episode blew me away! I gulp up the spoilers and set reports on sites like Gallifrey Base, I thrive on knowing what happens and even I was shocked with the way some of it played out. 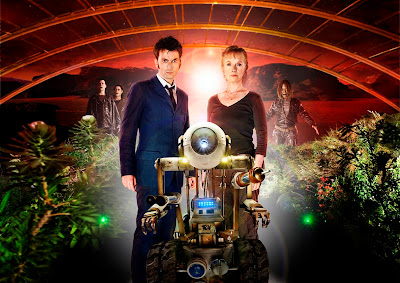 Firstly, the idea that the Doctor has to walk away from the happenings on Bowie Base One. The deaths there must always happen, for the future of the human race! Not a nice thought. And something that an audience of children would have mixed feelings about. They know the Doctor can't change evens. That's wrong. They also know, however, that he is there to help people, it's why he travels! And if that wasn't conflicting enough for the poor kiddy winks the Doctor then (after walking away, finally) changes his mind, becomes arrogant and develops a kind of God Complex - he become a Doctor that many children won't like! Many children may even be scared of him! This is dangerous territory for Doctor Who.

And then, after cheating time and breaking all the rules the Doctor has spent years ramming down children's throats, he fails. Adelaide kills herself anyway, he saved them all and fucked up time FOR NOTHING. WELL, not for nothing - it was all to bring about the ominous hints of death.

And it works. We have NEVER seen the Doctor like this. I walked away from this episode loving it, but HATING the Doctor! It was genius!! This really is the end for Ten isn't it? Only after seeing this has it hit me! I'm really going to miss him! Roll on Christmas/New Year 2009...

EDIT - I have now tried TWICE to review the and both attempts have turned out rubbish. And I can write! BUT I just cannot find the words to put across my thoughts on this episode... other than saying I FUCKING LOVED IT ALL THE WAY THROUGH.

BEST. EVER. NEW. WHO. EPISODE. (SO FAR).
Posted by Gareth Bundy